SHELRIDGE AUSSIE REBEL arrived to us from far Australia after years of waiting him.

Rebel comes from the well-known “Shelridge kennels”, who specialise in Rhodesian Ridgebacks with over 40-years experience in this breed.

We thank Dawn Redman his breeder, for entrusting such a gorgeous boy into our care and for everything she did for us!

Rebel has an excellent pedigree which boasts many outstanding top quality RR’s which together combine Australian, American and South African ancestry.
If you glance over his four generation pedigree you will view the following RR speciality winners:

Rebel’s sire is BIS BISS Australian Champion Lionsbane Hes The Boss (aka Kimba). A Rhodesian Ridgeback that combines great conformation and a fabulous temperament. He not only has the looks but the credentials too. He is an Australian National Rhodesian Ridgeback Specialty “Best In Show” winner and has Multi Show and Group awards. Kimba is also a successful sire producing Multi Australian Grand Champions and Champion progeny.

Rebel’s dam is the beautiful MRBIS/RBISS Australian Champion Ozrhode Divine Mystique (aka Misty) bred by the famed Ozrhode Kennels and owned by esteemed Shelridge Kennels. Misty possesses a much sort after conformation being well balanced and sound whether still or on the move. “Misty” has been awarded at both RR Specialty and All Breeds champ show level. She is a Multi South Australian RR Club Pointscore winner (2005 & 2007) and won South Australian RR Club Rhodesian Ridgeback of the Year 2007. Misty is a fantastic Rhodesian Ridgeback to observe in the showring, having “joie de vivre” which has earned her Multi show and Group level accolades, bestowed at some highly contested Australian championship shows. The adage “quality produces quality” is certainly true where Misty is concerned, as she has won the “Best Dam and Progeny Class” on four occasions at Australian Rhodesian Ridgeback Specialty Champ Shows.

He is a dog what you come to love immediately.

We never thought that we would find a dog as loving and affectionate as our Sorbonne, but Rebel has proved us wrong.
Rebel is an extremely loving boy who likes to give us a cuddle and snuggle whenever he gets the chance. He is a young dog who is self-confident and he is always ready for adventure and activity. He is continuously eager to please us being extremely focused on us, trying to please us whenever he can so enthusiastically awaiting our commands.
Rebel is a dog with absolutely exhaustless temperament, constantly ready for doing anything.
He is absolutely nonaggressive and joyful dog, all the time wagging his tail.

But Rebel is not only wonderful family pet, but he is also a great working dog, what is really very important for me.

Rebel is industrious dog, very willing and diligent.
Already very soon we realised that this dog has an enormous working potential and is very talented in different activities. He enjoyes working with me and a teamwork much, he is very easily motivated dog who is eagerly waiting for my commands at all times.
Rebel is a dog of very strong nerves, what predestines him well for working.
He is capable and willing to work and be concentrated even also “under pressure” and at unfavourable situations, what proves his psychic equanimity and high working usability.
In activities requiring his own enterprise and independency (like tracking) he has no problem to work independently from a leader.
(see his video page)

We train with Rebel a classic obedience including retrieving, and overcaming various hurdles. Our speciality is tracking, where we have passed all possible special tracking exams, except one what we are training for at present time.

We would like to show to everybody that also ridgeback could be a great working dog and we want to change an established, not much positive opinion for working ability of this breed. And we are quite successful although we are at the beginning of our effort.

Up to now Rebel handily passed 12 examinations. His first exams – namely ZOP (basic obedience exam + behaviour/mental test), ZZO (obedience + behaviour/mental test), ZPU 1 (higher obedience + hurdles + tracking exam) and FPr 1 (special tracking exam).
It is noteworthy that all these mentioned exams he has passsed before his 2. birthday, and mainly the uneasy tracking exam FPr 1 is a great achievement for this age.
In Spring 2010 he passed one another hard special tracking exam level II – FPr 2! It is important to underline, that to this day only 2 another ridgebacks passed this difficult exam in all history of Czech RR breeding and even Rebel is the most youngest from them! He managed to pass it in his only 29 months and just after only 8 months of tracking training!
In October 2010 he managed to pass the last and hardest from serie of tracking exams FPr – it means FPr 3. He is the first and only ridgeback in whole czech ridgeback´s breed history who passed it.
In addition Rebel as the first and only ridgeback again in CZ history passed such difficult obedience and tracking exam as exam named ZPS 1 is!! It is a huge success on a working field.
And on the top of all, Rebel passed the most existing difficult tracking examinations like FH1 and FH2! Those are such a difficult exams that only about 20 dogs pass it in Czech Republic every year. Both are extremely hard and prove a dog´s tracking ability and Rebel is the only ridgeback who was able to pass those examinations. And moreover – Rebel passed the exam FH2 for three times !

The absolute top of his tracking skills is a passing of the highest supreme tracking exam – rightly feared double day exam IPO-FH!
I am very proud of Rebel! This exam is the absolute top test for sporting trackers and really it´s not easy to pass it.
It is doubleday exam, when the dog has to work out each day minimally 3 hours old track of stranger, with crossing of the track by another stranger, the track is 1800 m long, with 8 legs, 7 corners (two of them must be sharp corners), with arch and with 7 articles.
Rebel passed this exam in unfamiliar organisation, on the tracks of two absolute unfamiliar strangers and on unfamiliar terrains and he got very nice points scores both days what even I did not hoped before ..

According the statistics of our Czech cynology organisation only few dogs from whole Czech Republic are successful each year on this test. Only few dogs are yearly prepared for this exam and only the best are able to pass it..
For example in year 2012 from 9 entered dogs only 2 passed it, in year 2011 from 7 dogs only 4 did it, in year 2010 again only 4 dogs from 10 passed it ..
So I could say it is not only the great success of our Rebel but this is the great success for the all rhodesian ridgeback breed !

At present time Rebel is still in training and is preparing for each year representation of Czech tracking qualification for Czech tracking Championships. Cross us your fingers please

But most of all – Rebel presents his working skills on many official obedience and tracking trials where we are participating several times a year. He is only ridgeback in usually strong competitions including dogs from several working breeds like german shepherd, malinois, etc.. and he usually stands on the winning places! Even he was able to win in official tracking trials over experienced competitors ! I am very proud of him that he is able to cope with such a strong competitors.. And additional he was presenting himself and rhodesian ridgeback breed for the first time in a history on a republic level, when he was qualificated in year 2013 for Czech championship tracking qualification and he did an amazing work there !
His trials results you could see in menu under “examinations” ..

He was also trained as a hunting dog shortly, but this training branch did not address us at all, so we do not traing hunting ability any more ..
Rebel actively takes part in shows in Czech Republic and abroad too. Rebel is a great show dog who is very successful. He is already Interchampion, Champion of Czech Republic, Grandchampion of Czech Republic, Champion of Slovakia, Champion of Hungary, Champion of Poland, Club Champion of KCHRR and is a candidate for many other champion titles.. He has won at Group level in Poland, Hungary and Slovakia and is already an All Breeds Best Exhibit In Show winner and Czech National Winner 2009. He was also awarded as The best sport ridgeback of KCHRR in 2009, The 2. Best male of KCHRR in 2009, Best Working dog KCHRR in 2010, Best Working dog KCHRR 2011 and also other titles… He is also class winners of czech and hungarian ridgebacks club shows.
His all show success and result you could check in link “Shows” in menu.

However Rebel does sometimes live up to his name by constantly inventing new roguery when he is left to his own devices, but these kind of antics make him a fun dog and even more loveable. Of course all his naughty deeds are forgiven because of his beautiful character.
Rebel together with our very discreet and kind Sorbonne makes up a great couple and are complementing each other perfectly. 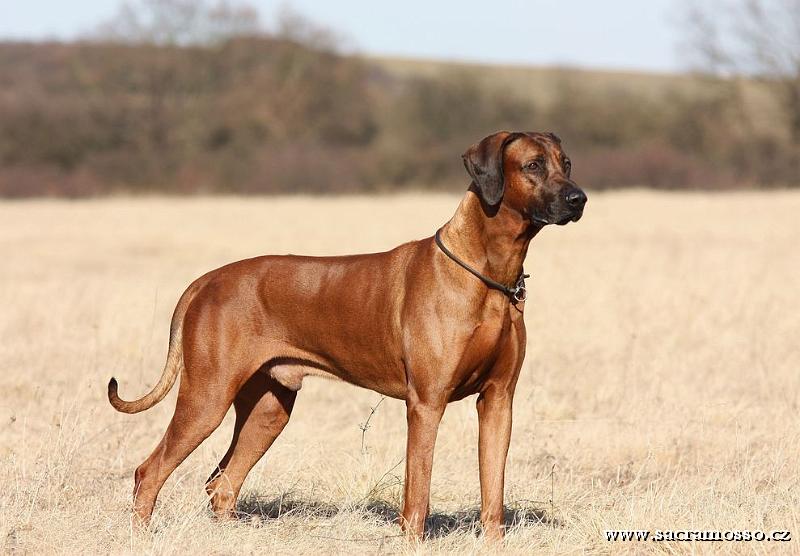